ESPN’s Outside the Lines recently profiled Allen Bailey, the only NFL player ever from a tiny community on Sapelo Island, Georgia. Watch the video here.

I had the privilege to visit Sapelo Island while taking an honors course at the University of Georgia. Sapelo Island is one of those rare places in the United States (and increasingly, the world) that seems completely cut off from humanity. We studied the ecology of Sapelo Island (a barrier island with marsh on one side), but the people that live on Sapelo are a study in sociology/anthropology.

I don’t remember the Reynolds Mansion looking that nice when I visited Sapelo, nor do I remember any of the construction shown in the video. It was just a small gullah/geechee community with a UGA research facility. With great food.

KU Alum is City Manager for New City in India

A post on LinkedIn from a friend directed me to a news article about a new “hill station” (or city) in India that is being built from scratch.  There are several quotes from Lavasa’s city manager, Scot Wrighton.  Scot is a University of Kansas MPA program alum (a KUCIMAT) who previously worked at the University of Georgia’s Carl Vinson Institute.  As one of the KUCIMATs in Georgia, Scot interviewed me during my application process for the University of Kansas.  The Carl Vinson Institute has a small piece about one of Scot’s visits to India earlier this year.  Way to go, Scot!

Thank you, Athens!  Finally the Athens-Clarke County Government is dealing with a problem that has plagued eastern Clarke County and the University of Georgia for years.  [That wasn’t sarcasm, was it?]

The problem?  The wretched smell known as “poop on the Loop” or the “East Campus funk”- the smell produced by the North Oconee River sewage treatment plant that reminds me of rotten eggs or human feces.  Visitors, residents, and students get to smell this all the time, in the areas around East Campus (of the University of Georgia), the Loop (Highway 10), and College Station Road.

And this is completely an environmental issue.  In the Environmental Protection Agency’s brochure titled Reporting Environmental Violations (pdf), the first listed “sign of possible violation” is “strong, offensive, or unusual chemical odors.”  Want to see the miriad of compliance issues the EPA has found at this smelly plant?

Today, the Athens-Banner Herald published an article about a new sewage treatment plant, which is under construction and scheduled to open on February 12, 2012 (yep, Athens has to put up with the smell for two and a half more years).

Why has it taken so long to fix this problem?  I say long because the East Campus stench was occurring when I first arrived on campus (2004) and won’t be fixed until 2012, or 8 years.

In my opinion, the smell has taken this long to fix because it mainly affects the University of Georgia community, and especially the students of UGA.  The North Oconee sewage plant sits across the river from the UGA campus (see the location from satellite), in an area where mostly UGA students reside.

So thank you, Athens-Clarke County, for attempting to fix this problem after the taxpayers in your county have put up with this smell for a decade.  Why couldn’t you have just installed scrubbers or something in the interim?

If you would care to see more information, the EPA’s website on the North Oconee River sewage treatment facility is here.  Their compliance status (or really, lack thereof) is here, and other information is here.

Finally I know where I will be after graduating in May from the University of Georgia.

I am going to be a University of Kansas Jayhawk! 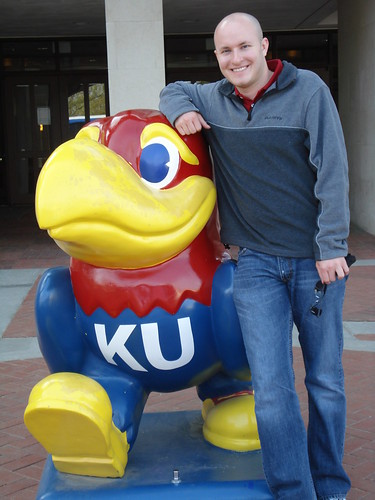 Friday afternoon I was informed that I had been admitted to the Master’s of Public Administration program at the University of Kansas.

And I couldn’t have been more excited.

Four years ago, I wanted to go to law school. I made the decision to attend the University of Georgia for undergrad, knowing that I could have gone to “big name” schools. I decided to save money and attend an in-state school where I would receive free tuition (HOPE Scholarship). I would save money to go to the best graduate school (law, at the time) I could get into.

KU is known for its city management program, the field I wish to enter after graduate school.

So when I got into KU, the best school (by far) for city management, the decision was a no-brainer.

I’m proud to say I will be attending the University of Kansas, where I will start in June (the MPA program starts at the beginning of the summer). I am a nervous (and a little scared) about moving so far away from home (and so soon, the beginning of June), but I know I can survive.

Posting might be a little light around here for the next month or so (or maybe I will do the usual and post on here to procrastinate). I’ve got to finish classes at Georgia, take finals, graduate, get packed up, move to Lawrence, get settled in, and become a Jayhawk.

Not all of these are mine (in fact, only one is mine). But still a sweet picture!

Hi! I’m Chris, I run cities and counties (city management) by day and dabble in web development by night. And raise three kids.


This is my personal website, where I talk a little about government, a little about web design, and whatever else I find interesting. If you would like to contact me, I'm available here.


My short form writing is available on my Micro.blog.