This is the ultimate customer service.  Last week the University of Kansas Library’s journal search wasn’t working for off-campus internet.  The KU Library offers a way to instant message a librarian.  I was going to IM the librarian just to tell them of the problem, but the librarian went above and beyond the call of duty.  He asked me for details of the article in question, and he was able to access it, download it, and email a .pdf of it to me.  That’s customer service!

KU Alum is City Manager for New City in India

A post on LinkedIn from a friend directed me to a news article about a new “hill station” (or city) in India that is being built from scratch.  There are several quotes from Lavasa’s city manager, Scot Wrighton.  Scot is a University of Kansas MPA program alum (a KUCIMAT) who previously worked at the University of Georgia’s Carl Vinson Institute.  As one of the KUCIMATs in Georgia, Scot interviewed me during my application process for the University of Kansas.  The Carl Vinson Institute has a small piece about one of Scot’s visits to India earlier this year.  Way to go, Scot!

Fellows must be recently graduated from an MPA program.  The Fellows acquire a position with an affiliated local government to work and get a real world introduction to local government management.  Just like my MPA program at the University of Kansas.

The University of Georgia has one participant in the Fellowship (KU has none, which isn’t surprising because of its own internship program).  5 Fellows (of 13) were placed with Georgia local governments.  I’m proud that my home state is taking so many of these local government students; this bodes well for management and government in Georgia.

And, the Fellowship program even has a blog. 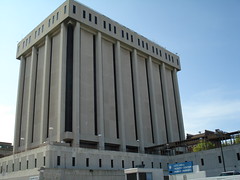 Today I completed an internship with the Budget Office of the Unified Government of Wyandotte County/Kansas City, Kansas.

It was a little sad to leave this afternoon.  I’ve worked with my boss and coworkers for nearly a year, and made a certain bond with them.  You know people are dedicated when they are sitting at a budget work session after midnight (here’s the tweet to prove it), after arriving at work at 8am that morning.  A close bond forms at times like those.

I’ve also learned the Unified Government (and it’s funds and departments) inside and out.  And I’ve met so many people that serve the citizens of Wyandotte County and Kansas City every day.

And I’ve bugged all of these wonderful public servants.  From learning to do accounts payable and trying to understand the fund structure, to surveying busy people for school projects, I know a lot of people have helped me without complaint.  Thank you all.

I have learned so much from my boss, my coworkers, and everyone else.  It is my hope that I contributed just as much in my time with the Budget Office.  I’m going to keep this post short, but I have many more thoughts about learning at the Unified Government and my experiences, most of which made it into a Moleskine or two.

As a side note, there were lots of events that took place at work.  Of note are seeing the Thunderbirds practice over Kansas City and witnessing a massive wreck on the way to work (and how social media got pictures of the wreck on the evening news).

Heading to Colorado in May

In About, KU, Professional, Public Administration

I have some exciting news, which I first noted on my Facebook wall a while ago: “Chris Lindsey will be heading to Colorado in June for a great work opportunity!”

I will be going to Denver in May for a new job.  Well, not just me – Emily will be joining me!  Emily and I will be moving out to somewhere in west Denver shortly after she graduates from UGA in May.

I’ve accepted a position with the government of Jefferson County, Colorado.  I will be working a full-time internship to complete my the requirements for my degree from the University of Kansas.

Jefferson County is immediately west of Denver.  The county seat is the City of Golden, the home of the Coors Brewing Company (and the mountain stream from the commercials).  JeffCo is known as the Gateway to the Rocky Mountains, and the beauty shows it.  When I was interviewing for the job, I could look out the office windows and see the Rockies.

I’m really excited about working for Jefferson County.  They are very innovative and were featured last July in ICMA’s Public Management magazine for their method of prioritizing county services.

And they have a county blog (here) that’s advertised prominently on their homepage.  How unique is that?!  The very first post on Conversations with JeffCo was from the County Administrator.  He even responded to concerned citizens in the comments.

So the next few months will be hectic.  But I will update everyone after Emily and I get settled in.

And today Lawrence got the snow. 3.5 inches to be sure. If I had finished my last final by dark, I would’ve been playing in the snow. 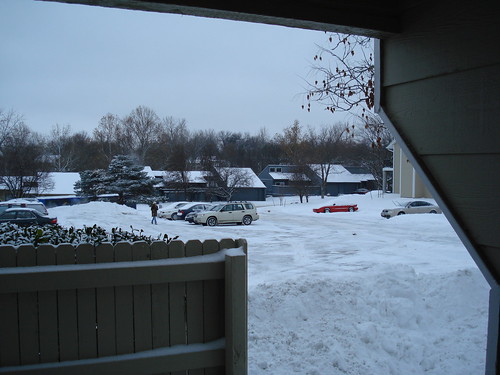 I’m finished with finals now! Fall semester at KU is finished, and I’m heading home for Christmas in the morning. 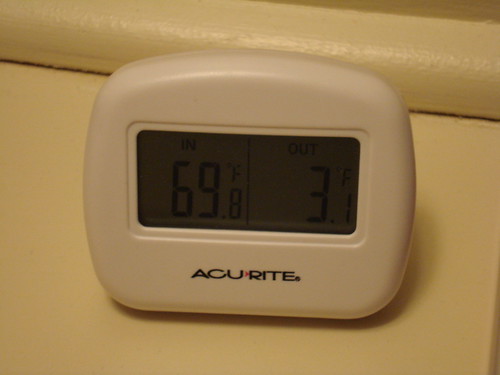 Seriously, 3 degrees is way too cold. This picture was taken very early this morning (don’t ask, it is finals week). 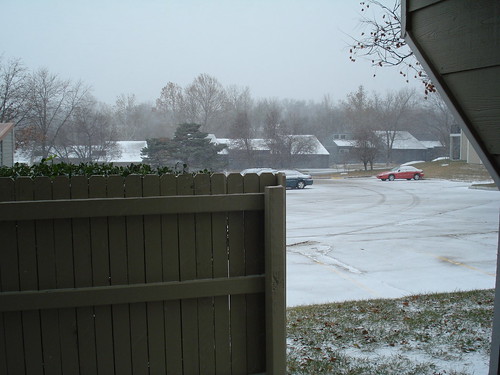 This is the first snowfall I’ve experienced since I’ve moved to Kansas (there was snow on the ground when I got back from Thanksgiving). The storm report says we received 0.7 inches of snow, and there were 54 reported accidents in Douglas County with 5 minor injuries. The driving wasn’t bad (for me), but there was a bit of ice this evening in my parking lot and on some walkways. Now, surviving the rest of the winter will likely be much more difficult.

Saturday morning (very early) I am heading with my MPA class to the International City/County Management Association’s Annual Conference. I’m really excited about meeting lots of fellow KUCIMATs and learning lots. This is my first professional conference of any kind, so this will be a new experience for me.

Georgia Coach on Football In The South

I should be finishing a paper right now, but this quote is priceless. The quote is buried in this post by the Ledger-Enquirer’s David Hale (his blog is amazing, by the way).

Hale discusses Jon Fabris, Georgia defensive ends coach (and special teams coach, I believe), who once coached in the PAC-10 conference. The significance here is that Georgia plays a PAC-10 team this weekend, Arizona State.

Hale asks Coach Fabris about the differences between the Southeastern Conference and the PAC-10, and Fabris talks about the fan base:

And I should add that I mean no disrespect to my KU brethren, but in Kansas it seems football is something to pass the time during the basketball off-season (also see the last post on KU’s quarterback, who even the press don’t recognize on the street).

PS – I also love Coach Martinez (the defensive coordinator) and how he answered media questions after a bit of a breakdown in the defense last weekend:

Q: Richt mentioned that Rudy Carpenter’s completion percentage is higher when teams blitz.
A: That could be true.

Q: What concerns presented themselves on South Carolina’s last two possessions? The majority of their yards came on their last two drives?
A: The last three series.

Q: On the TV, I think Danielson was saying the safety was responsible as well.
A: Could have.

Q: If you look at it, it looks like it might be Ramarcus (Brown) for people that don’t know what the safety’s responsibility is on that play.
A: It wasn’t him.

Q: Will there be any personnel moves?
A: There could be.

Ha! Show the enemy nothing!

Hi! I’m Chris, I run cities and counties (city management) by day and dabble in web development by night. And raise three kids.


This is my personal website, where I talk a little about government, a little about web design, and whatever else I find interesting. If you would like to contact me, I'm available here.


My short form writing is available on my Micro.blog.